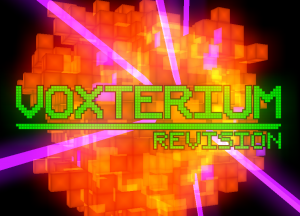 My first entry in Ludum Dare was a small little arcadey shooter called Voxterium. It was a blast to develop, and the feedback was overall pretty good.  I finished in the top #50 overall (number 48 to be exact), and placed in the top 50 in 3 other categories.

The reception coupled with the fact that it’s about the perfect sized project for an initial release, has made me push everything aside to work on the sequel.

My continued work on Voxterium has been going on nicely.  I’ve been infected with plague the last few weeks, but have managed to work quite a bit on it.

There still is some cleanup and optimization to do, but the biggest part of my focus has been on the balancing act.  I’ve completely overhauled the powerups, weapon damage and reproduction rates.  I’ve added new attacks that the enemy can throw at you.. laser beams and turrents that are placed are a few.

The Recursive Power up is particularly nice… I’ve done a bit of graphical work… some post processing effects, particles, texturing, etc.  Just to get the base code in.  I plan to revisit the graphic side when I’m more in the polish phase.  Still a lot of work to do there. I’ve also implemented a system of levels.  So instead of mind-numbingly shooting at a thing that won’t die, there will be multiple things that will die.  I’m trying to decide if progression will be based on designed levels, or generated levels. Right now its a little bit of both.

I have also added in the much asked for mouse sensitivity sliders.  As well as keyboard and controller support.

I have a couple tid-bits I want to add in the next few days.  Hopefully after then I will post a video of the new improvements.

The Ludum Dare results came in for Voxterium.

I could throw a big wall of text at you going into more detail, but the truth is, I couldn’t be more thrilled.

You should play it.