My Ludum Dare 26 entry is complete.   # is now available to play. 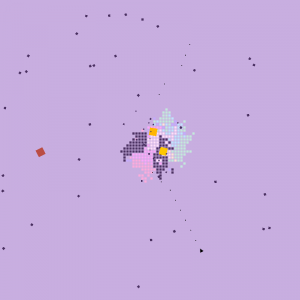 Ludum Dare is my absolute favorite weekend.  When I really feel as if I have some good stuff in locked away in the back of my head., and Ludum Dare comes It’s probably the best concept for Ludum Dare I’ve come up with yet.

That one guy that played Voxterium will immediately recognize it’s influence.

Lot of really good comments so far about the audio, which is a bit different, because i’m really not an “audio” guy.  Don’t really care much for “musical” games for the most part, but I’m kind of excited as I see that as an opportunity.

Check it out here

well… this is going a lot faster than i originally had thought. the game is currently what I will call “feature complete”. it’s all there. it’s just not done. basically all that’s left is bug fixes and polish, and that list is starting to shrink faster than it grows.

i thought i would take some time and talk about level design. i’m not the world’s best at level design, and this is the sort of game that screams level design. in all honesty, voxterium’s level design was not very good, i will even go as far as to say the game was never really played by most, due to the level design. i received comments on that and really couldn’t argue. i made several blog posts about how the game didn’t want levels, and i forced them in.

(the survival modes are still awesome)

this game on the other hand is all about the level design. i mentioned in the earlier post that this was a game about assumptions. that still holds true, even more so than when i started. it’s extremely challenging to design levels around this concept… if you hand hold too much, the player is not challenged and the mechanics are a gimmick. if you make it too hard, the player is lost and gives up without even trying.

the levels weren’t really too hard to design. while to solve them is sometimes difficult, the physical layout of each level is really simple. there’s a button, a door and a platform or two. it’s the ‘assumption’ that constantly changes, so the need for level’s complexity to grow to add difficulty isn’t necessary.

it’s also interesting in that the simplicity actually pushes the player along. without complexity, the player doesn’t have distractions and is more like;y to be forced out of the box. which is what makes this one of the easier levels of the game…

level order is also extremely important in this game. i tried my best to get the player into this flow…

i guess time will tell if i achieve that or not. 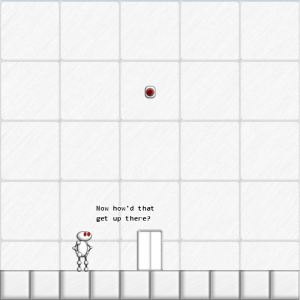 Voxterium : Revision is now on Desura!

After a “soft” release earlier today, and a couple wonderful lessons in “if it can go wrong, it generally will”, Voxterium : Revision is out!

Get information about the game, download the demo, or at least purchase the game at www.voxterium.com.  Currently, the game is available only on the website.  It will be available on more distribution sites in the next few days.

I highly recommend that you download the demo first, just to make sure your computer will run the game.  If you run into any issues at all, stop by the support page and check out the common issues posted, or send an email to me or support@picardy-third.com.

If you enjoy the demo, or even if you don’t, you can purchase the game from www.voxterium.com.

And as always, I appreciate any feedback.  Let me know what you think about the game via email, or via twitter.

No go blast some bytes!

Got a little bit of inspiration from the recent Because We May sale.  I can release this game whenever I want.  So I’m going to.

The game will be available directly on the Voxterium website, as well as Desura.  Pricing is not completely set yet, but I can guarantee it will be less than Diablo 3.

I’d like to thank everyone that’s shown interest, as all those that have helped out with logistics and testing.

This little guy was my Ludum Dare #23 entry.  It is a little 2D Scorched Earth type game with magic.  I had to put my own little twists on it however.  One, it is in real time and two, the game uses your previous play throughs as your opponents. 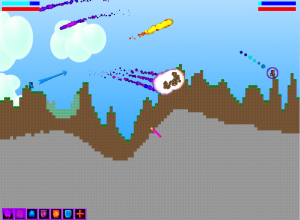 It was a lot of fun to develop, but to be honest I wasn’t “feeling” this Ludum Dare as much as the previous.  My scores reflected that, but considering the amount of entries, I guess I didn’t do all that bad.

Go ahead and check it out on its Ludum Dare page.

Tried a 1080p video this time, and still looks like garbage. Gonna look into another service for the next post in attempt to get a clearer video.

Or take a class on screen shot and video making…